The Type 1 Armored Suit was a later slave model, known for its capacity of remote control operation. This option proved unpopular and eventually, all Arm-slaves had this option removed. The Type 1 was the last model produced with this capacity. It can be remote operated by cyberbrain link up or by manually entered remote control. Even though remote control robots still find circulation, large, armed ones, did not.

The Type 1 is also known for extended appendages, a design characteristic copied by the Russian Dazhbogs. The Type 1 has an additional 5-foot reach with its arms.

Based on the Type 1 GSDF, the Dazhbog designers made no attempt to emulate the human body with the design. It features huge arms, secondary rear mounted appendages for accelerated movement and an external mounted weapon system. The Dazhbog cannot hold weapons like the other suits with its oddly shaped hands. However, its arm length gives it an additional +5 foot reach. On its back is a mounted 7.62 Gattling Cannon that spins around to fire between the two massive legs. Because of the shape of the suit, the suit is not controlled through a slave-system like the 303 but is piloted exclusively from controls in the large torso. Its rear appendages contain support arms for the main gun. 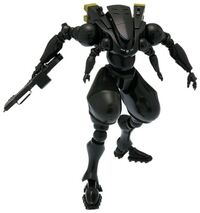 The 303 is used by the Japanese Coast Guard and Navy. The suit is equipped with one 20mm Machine Cannon and one 40mm Grenade Launcher. This 303 is the premier top Arm-Slave model in service in the GSDF and found circulation throughout the globe. It’s weapons are hand held and, as a result, can be swapped with relative ease. The suit is controlled from direct physical input through mimicking identical appendages the pilot's arm goes through. These smaller appendages have hands as well and the “strings” can be cut from the slave arms to control just the small master ones. There is no strength bonus to the smaller masters. The suit also has therm-optic camo.

Type 303 belonging to the Umibozu.