Ghost in the Shell Wiki
Register
Don't have an account?
Sign In
Advertisement
in: Technology, Mecha, Think Tanks

A Fuchikoma (フチコマ) is a 1-man tank (walker/roller) used by members of Section 9 of the National Public Safety Commission.

Fuchikoma possesses artificial intelligence and can act independently to support its user in combat. When not in use, they exhibit a childlike personality with much of curiosity and also provide much of the humor in the comic series, while also being used to elaborate on Shirow Masamune's philosophy and ideas. Their AI does not include typical safeguards as they are military hardware, but because they possess emotions. They are monitored for signs of instability as Motoko Kusanagi once programmed one unit to propose a "rebellion against humans", however, the plan was opposed by other units as it has no merit to rebel.

The Fuchikoma are synchronized nightly or after a mission to share their experiences and allow the entire group to learn from them. This makes each unit "homogenous" in personality as well as experience.

Mechanically, Fuchikoma have four legs and two manipulators with three fingers each as "hands". Each arm is mount with a machine gun. The "face" consists of a large main lens, a telescope, light, and two smaller sensors with a "mouth" below, which is commonly a grenade launcher, but sometimes a Gatling gun. There are several hardpoints to mount additional weaponry. There are wire units in back of a Fuchikoma, allowing it to descent from higher location like a "spider" with silk.

The pilot sits in a hunched position inside a large posterior pod with interface cables, leading to the standard ports in the user's neck for direct control, but the Fuchikoma can also be given orders to act without a pilot.

As a walker, Fuchikoma can handle many different types of terrain, and are able to walk up walls, rappel, walk, or extend wheels from their feet to drive. They are also submersible.

Each unit possesses thermoptic camouflage. The color of Fuchikoma is different by unit and time. In some episode, all units are white, while in others they can be red, aqua, gray, olive, or Arabeske.

With AI onboard, Fuchikoma is able to independently think, act, and execute orders. Fuchikoma possess an innocent, childlike personality with much of curiosity. There is at least one occasion that a Fuchikoma enter a homicide scene, asking to see victim's photo and feeling disgusted after see the photo via connecting to Batou.

Fuchikoma is able to override prohibitions. It sometimes makes pranks by inputting mischievous conversation into an operator.

During free time, Fuchikoma may play poker games with members from other sectors.

Fuchikoma design sheet for Ghost in the Shell (video game)

Fuchikoma design sheet for Ghost in the Shell (video game) 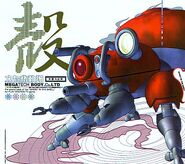