The individual eleven was a fake file that contained a cyberbrain virus. It only affected those who were virgins before cyberization.

The Individual Eleven's motive for terror is an essay also entitled "The Individual Eleven", which is, in reality, a fake essay implanted with a Computer virus that infects all who read it.[1] It even infected Borma of Section 9, although he showed no further signs of symptoms as a result.[1] The virus remains dormant up until the user downloads all of the other ten essays by Patrick Sylvester, a fictional political theorist, when it programs the person infected by it to commit suicide[1][2]. However, it seems the virus itself does not cause the members of the Individual Eleven to commit the acts of terror, it is their own political views which cause them to do so. The virus only seems to be there to make them, perhaps, unwilling martyrs, as all the members of the primary Individual Eleven (except Kuze) kill each other with swords in a televised mass suicide.[1] Although these twelve were apparently the primary members, it is likely that other people, such as the refugees that committed suicide bombings, could be considered as a part of the Individual Eleven because they were also infected with the virus.

The eleventh essay supposedly refers to the events surrounding the May 15th Incident, which was one of several incidents that led to the rise of Japanese militarism.

It should be noted that the virus only affects those who possess cyberbrains, and, in addition, it is suggested by Kazundo Gouda that the virus affects only those individuals who were virgins prior to undergoing full cyberization.[3] Later on, it is discovered that the virus was made by Gouda himself, and he is the one who designed the virus to infect people who were virgins before their cyber-transformation. This decision was based on his personal experience, from the fact he is a virgin.

The Individual Eleven is a terrorist group attacking the 3 000 000 refugees currently in camps. Their ideology is based all around the need for individualism and nationalism, implanted by the virus. In the past, many fear that the onset of cyberization cultivates a trend for people to be more synchronous. Such people would share so many similar memories via the Internet, and could share them at will. By doing so, they would cease being unique and lose their individuality. They believed the Internet may eventually become a group consciousness for the entire world and people themselves, and refute the possession of singular ghosts. The Individual Eleven group formed from an idea of separate individuals performing terrorists acts without knowing the other members or how many there really are. The true origin of the faction stems to a more insidious source, leaving evidence that a virus may have infected cyberbrains with the knowledge to act in a certain way, in fact contradicting their motus operandi. By having similar motivations and sharing the exact same root cause of agenda, they become a more self-contained entity. Because no leader ever came forward and several other cases were connected to the Individual Eleven, even though the virus theory never made a connection in those situations, it is thought the events around this terrorist group mirrors that of the Laughing Man case. Only Hideo Kuze, who valued both individuality and synchronized communion, had broken free of the virus by sheer will, unknowingly to the virus creator's knowing. He also had opposing ideals to the virus, and genuinely wanted to help the refugees.

Many people and groups claim to be members of "The Individual 11", but a few core members appear in S2 Episode 12 "To Those Without Even a Name... – SELECON". Despite their namesake, the group consists of 12 Members, who perform a mass act of public murder/suicide. Aside from Kuze, all other members remain nameless until episode 15 when the Tachikomas discover their identities through military information.

As stated above, of these 12 members, only Hideo Kuze survived their mass suicide. 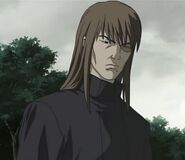 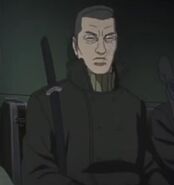 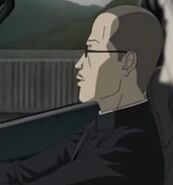 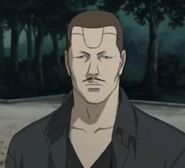 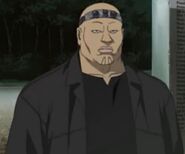 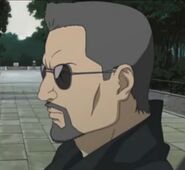 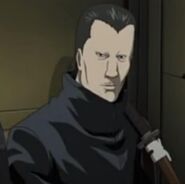 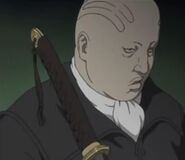 There are three characters. From top to bottom, they stand for three different numbers (9, 10 and 11). At the same time, they all have another meaning as Kanji:

Nine also stands for the Section 9 and 11 stands for "The Individual Eleven (terrorist group that feature in the story).

The logo was used as the mysterious mark of the terrorists in much the same way as a traditional Japanese family mark (kamon) or a samurai logo on their flag.