Ghost in the Shell Wiki
Register
Don't have an account?
Sign In
Advertisement
in: Stubs, Characters, Arise,
and 2 more

Ghost in the Shell Arise: Ghost is Alive

Elizabeth Maxwell
Major Motoko Kusanagi is a member of the elite Unit 501 and later Public Security Section 9 in Ghost in the Shell: Arise.

Motoko Kusanagi's birth and upbringing occurred under unusual circumstances. Her mother died in an accident while she was still pregnant with Motoko, but doctors were able save the fetus's brain and implant it in a cyborg body, meaning that Motoko was effectively cyberized from birth. As cyborgs were extremely expensive and the procedure could not be covered by health insurance, the government placed Motoko in the care of the JGSDF's Unit 501, where she was raised by the unit's leader, Lieutenant Colonel Mamuro. Eventually, she entered active duty and employed her skills as a wizard-class hacker in the service of Unit 501, attaining the rank of major.

Motoko is completely redesigned in Arise. Her cybernetic body is shown as far younger in appearance and shorter in height to other versions, resembling a teenager or young adult and not much taller than Chief Aramaki. Her hair is blue and cut in a close, straight bang form, and she is usually shown wearing full red leather pants and jackets and high heel boots. 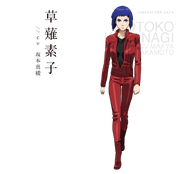