Public Security Section 9, also referred to as Public Safety Section 9 in some translations, is an intelligence department under the Ministry of Home Affairs[1] from Masamune Shirow's Ghost in the Shell anime and manga series. In the original movie, it is known as the Shell Squad or Security Police Section 9.[2]

Its operatives are trained in various methods ranging from investigations to cyberwarfare, as their structure was based on the German GSG-9.[3] They had cross-training exercises in the past with the British SAS's 22nd Regiment.[4]

Public Security Section 9 was established as a search and rescue organization.[1] Officially built as an international organization, it is actually a counter-terrorist network and anti-crime unit operating in the Japanese National Public Safety Commission. Its operatives are allowed to act with or without government consent as they are almost unknown to the public eye.[5] In particular, Section 9 and its members are among the best cyber warfare operatives in the country, and as a result usually end up involved in cases relating to the internet, such as hacking and cyberterrorism.[5] Members are specially selected from other groups, and thus no volunteers are accepted.

Major Motoko Kusanagi was dispatched by Section 9 to spy on a building in New Port City. A foreign power is conspiring to recruit a domestic engineer to fix the Project 2501 "bug". The team moves in while Major activates her therm-optic camouflage. The foreign official refuses to return the engineer, while Kusanagi moves in and kills him.

In preparation for an attack on their headquarters by the Umibozu's shock troopers and their Type 303 Armed Suit robots, all remaining Section 9 members barricaded themselves into the building and fought the invaders with all the heavy weaponry they could muster.[1] Failing that, they assembled a diversion and escaped through a passage located in the sewers of New Port City They are all eventually captured, with the Major apparently killed.

Togusa spent the next three months wondering what happened to the rest, before suddenly meeting up with Batou. The whole thing turned out to be one of Aramaki's brilliant plans, sacrificing Section 9 in order to leave the prime suspect wide-open to arrest, investigation and prosecution.[6] Everyone, including the Major, is perfectly fine, and Aramaki is in the process of rebuilding and securing funding for the newly-reborn Section 9, which does not happen until 2nd GIG.

The 2nd season starts with Section 9 still not existing in an official capacity because of an amendment to the Special Forces Bill. The first episode involves a hostage situation in which eleven terrorists, who call themselves the Individual Eleven, hold up the Chinese Embassy demanding a swift change in the Refugee Action Policy. In other words, they demand the freedom of the refugees from the stand point that refugees drain the country. The previous PM of Japan issued a temporary bill that allowed for the entrance of refugees into certain zones, but the bill was never repealed. Because the new PM, Yoko Kayabuki, planned to repeal the policy soon, she had to act quickly on the terrorists before their demands became known in order to make sure it didn't seem like she was caving in to terrorist pressure.

Section 9 is promised full reestablishment, and the approval of their new budget proposal that includes the reinstatement of think tanks (Tachikomas), on the condition that there are no hostage casualties in the process of stopping the terrorists before the press blackout runs out. From this point on the 2nd season goes on to focus on the refugee issue from multiple perspectives, along with providing missing background information on almost all of the characters.

Visible signs of stand alone complex crimes focused on Japanese refugee policies start occurring that seem to be influenced by a third party.

Section 9 has been radically reformed after the Major leaves in order to pursue investigations of her own. The section has increased in size, and is now run by Togusa, because Batou declined the position. Solid State Society starts off by focusing on the cyberbrain suicides of members of a terrorist organization that gained asylum in Japan. This case leads into the finding that around twenty thousand children may have been abducted. The mastermind behind the crimes is known as "The Puppeteer," and is classified as a Wizard Class Hacker.

At some point before 2045, Section 9 is disbanded. Daisuke Aramaki is able to stay with the Interior Ministry and becomes an advisor. The Major, Batou, Ishikawa, and Saito form a mercenary unit named GHOST, and following the Synchronized Global Default in 2044, they travel to the warzone of California to freelance in the Sustainable War. Pazu, Boma, and Togusa go their own ways, with Togusa resuming work with the police.

In 2045, the new Prime Minister Chris Otomo Tate orders Aramaki to reestablish Section 9 at the request of the American government to investigate the emergence of the post-humans.

Section 9 was a clandestine organization, run by Aramaki, they investigate cyber-terrorism and Ghost Hacking. Section Nine was heavily increased in size, with multiple nationalities included. Section 9 was nearly destroyed by Hanka Robotics in the end, but was prevented. The Major in the end taking the same role as the original 1995 film and the Stand Alone Complex.

Public Security Section 9 is located in the Japanese city of Niihama-shi (also known as New Port City). The exact location of Section 9's headquarters is held as top-secret and is only known by the Japanese government and Section 9 employees. Their building is known to the public as a false security company.[3] 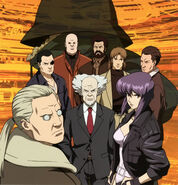 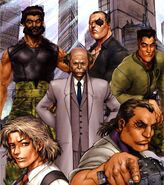