In Ghost In The Shell there has been many technological advances, including advances in the fields of cybernetics, bioengineering, biomechanics, prosthetics, bionics, robotics, and artificial intelligence. However it would be more easily described as cyberpunk technology.

A brain artificially augmented with physically-integrated electronic components. Most people have at least this as a minimum, cybernetic augmentation, however it is illegal for children (whose brains have yet to finish growing) to undergo this operation.

An AI walker/roller tank, appearing only in the Ghost in the Shell: Stand Alone Complex sub-universe. They are best described as a "spider-type multi-leg/multi-ped combat vehicle equipped with artificial intelligence", possessing the ability to act as both personal-transport units and mobile-weapons platforms.

A number of mecha appear in the GITS universe, some of them acting as military hardware, and others not. 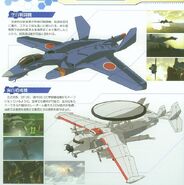