Thermoptic camouflage, also known as active camouflage is a special camouflage technology which enables the members of Section 9, as well as their Tachikoma tanks, to blend in with the environment, making them near-invisible to the naked eye.

It is an active stealth system which projects ambient conditions of the opposing side, and thus rendering the masked object transparent by transmission. The system is not shown to be perfect, as it seems unable to compensate for sudden changes and physical impacts nor impervious to close observation. A faint translucent distortion is shown as the limitations of the technology. In the legal landscape of the series, usage of the technology without a warrant is heavily restricted. The use of this technology by Section 9 is the exception, and not the norm - further highlighting their extraordinary legal standing.

In the Manga[edit | edit source]

In the first volume of the original manga, Major Kusanagi's first appearance shows her activating thermoptic camouflage after she uses delayed-fuse explosive shells to kill a foreign diplomat.

In the Films[edit | edit source]

In the Stand Alone Complex alternate time-line however, this technology seems to have been perfected and is capable of operating in highly illuminated environment.

The visual distortions are therefore purely for the benefit of the viewers. 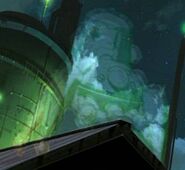 Add a photo to this gallery

Retrieved from "https://ghostintheshell.fandom.com/wiki/Thermoptic_camouflage?oldid=13140"
Community content is available under CC-BY-SA unless otherwise noted.