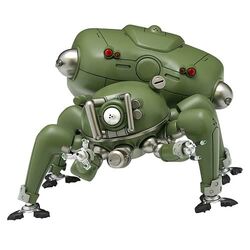 Uchikoma (ウチコマ) is a 1-man tank (walker/roller) used by members of Section 9 of the National Public Safety Commission in the anime series Ghost in the Shell: Stand Alone Complex.

After Tachikoma and their AI were destroyed due to their sacrifice in order to prevent a nuclear detonation, they are replaced by Uchikoma.

Uchikoma was introduced in the last episode of 2nd GIG and seen through Solid State Society.

Behind the Scene[edit | edit source]

Retrieved from "https://ghostintheshell.fandom.com/wiki/Uchikoma?oldid=12178"
Community content is available under CC-BY-SA unless otherwise noted.